You can check your LOCAL score, ONLINE score or OVERALL battle score

How to play a VERSUS

If you set a single mode to play a VERSUS game, it automatically becomes VERSUS The 01-Game and Standard Cricket are included in VERSUS game.
The video game is available in either the battle at the SHOP or ONLINE battle You can play at the VSPHOENIX.

※You need a PHOENIX CARD to use VERSUS Game.
※Even you apply a Handicap, it reflects on your VERSUS score

VERSUS rank is composed of 15 grades. Starts with no rank and the best grade is rank 15.
The title will be divided according to each rank level.

・The best Rank 15, "VERSUS KING" will be on the hall of honor

A RANK15 『VERSUS KING』is a special RANK.
It is the highest grade which wins the best honor rank; therefore, the rank changes due to the battle will be removed.

Furthermore, the privileges for VERSUS king only, including style (game screen background), dart throw, mark award, camera frame are applied to VERSUS King.

Challenge yourself toward the best rank VERSUS king which can be called as hall of the honor. 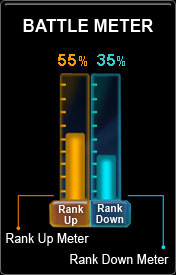 Change your point by opponent's rank 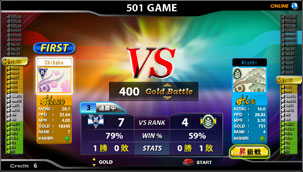 The STATS indicating inside of VERSUS page is the data only extracted from VERSUS subject game.

VERSUS TOTAL
This is computed STATS data based on previous VERSUS play data.


VERSUS MOVIE
It is computed data based on play data of VERSUS game in VS online battle with DUAL CAM between VSPHOENIX machines. You can check combining VESUS CAMERA STATS on VERSUS CAMERA in MY PAGE.

VERSUS ONLINE
VERSUS ONLINE indicates state of playing a net-work communication battle which is allowed to battle with VS MODE. (Date of VERSUS camera is included).

The VERSUS ONLINE of STATS will only aggregate VERSUS online data.

The distributions of game (01-game, cricket), opponent's camera, and opponent's area can be visualized through the win graph.
You can analyze the VERSUS battle.

VERSUS MOVIE refers to a VS ONLINE match using the DUAL CAM of VSPHOENIX machines.

See how to to play VERSUS MOVIE>> 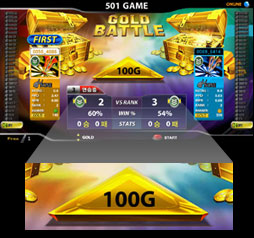 Gold Battle refers to a match where players bet their GOLD points. The amount of Gold that can be bet depends on the VERSUS RANK of the players. You can take the GOLD of your opponents if you win.

How to bet Gold

Before starting the game (usually when deciding the player to go first), use the triangle up/down arrows of the machine to set the amount of Gold for betting.

※GOLD BATTLE is only available in VERSUS LOCAL (Individual matches). It is not available in VS ONLINE matches (Including camera online matches). Gold Battle is available in the following games: 301~701 / S.Cricket / Count-Up / Pro Mode